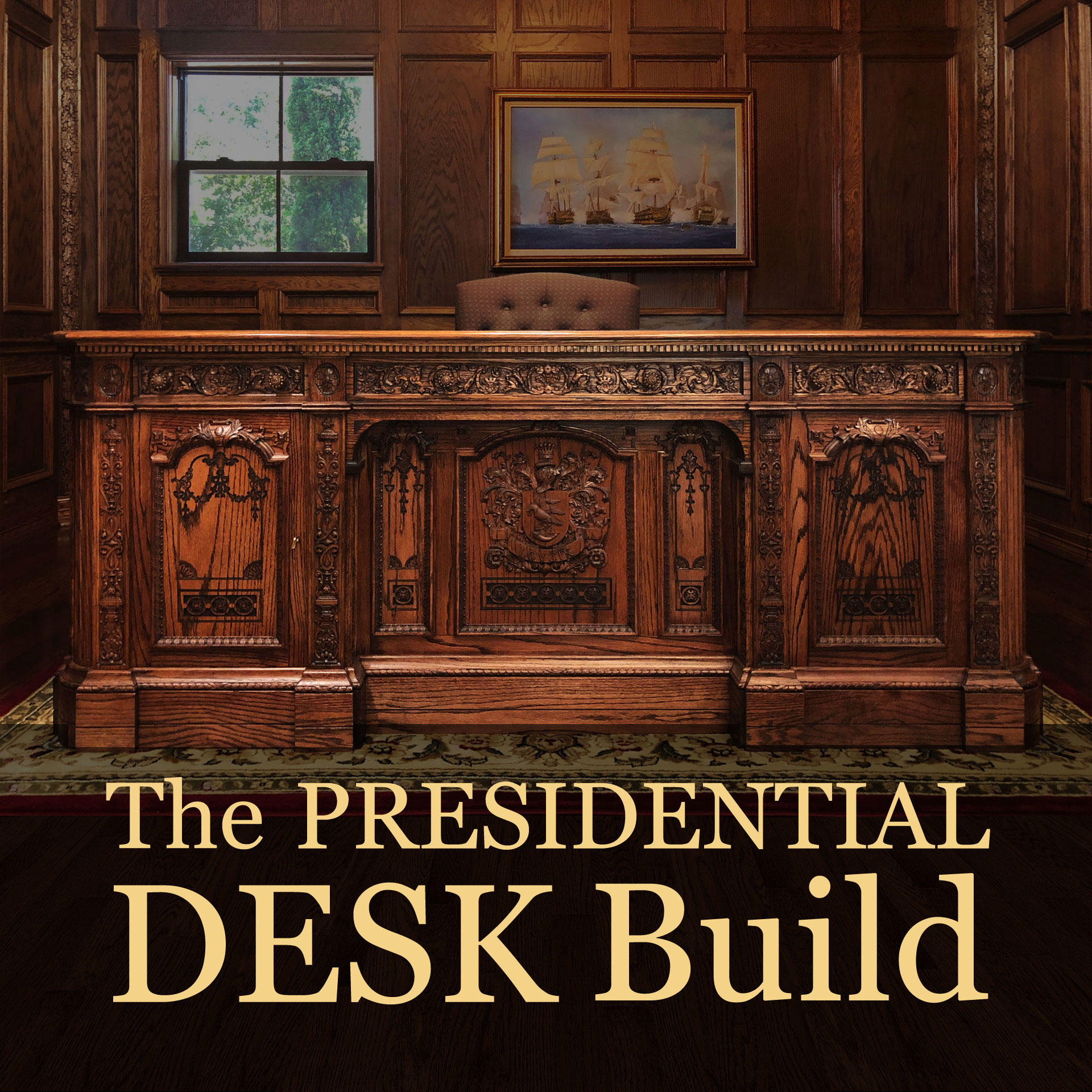 For those who have been following the Build Blog for awhile, you’re probably familiar with The Library CarveWright Built. If not, start with that and then come back to this article.

The library bookcases and paneling with all the detailed carvings were completed a couple of years ago, but this didn’t finish the room. It still needed to be furnished. Trying to find furniture for this room isn’t easy. For one, it’s a large room, and two, the pieces need to fit stylistically within the space. To start, we knew we needed an impressive desk, so on to google we went to do some research.

We found several desk ideas, but we kept going back to one that seemed to embody everything we were looking for. It was The Resolute Desk that sits at in the Oval Office. Once we learned the backstory of this desk being made from the timbers of a recovered British ship that had been lost in the Arctic, we were fully sold. You can learn the amazing story of the Resolute here on Wikipedia.

Ok, so The Resolute Desk has a cool story, it’s the right style, and we have found several companies making replicas. The problem was, as cool as having this desk would be, we didn’t entirely want the exact desk as the president. Maybe we could request some modifications like adding our family crest instead of the Eagle seal? Finally, we decided to just make it ourselves.

We found some plans for the desk online, and it was helpful in defining sizes, but ultimately it wasn’t detailed enough for much more. The trickiest part of this project was replicating the carvings. None of the 3D models for this desk existed yet, so we had to create all of it from scratch. Pattern modeling is meticulous work and can take a lot of time, so we split up the work between us and hired Michael Tyler at CarveBuddy.com to help make some of these. Utilizing the tools available in the Pattern Modeling Suite, Vector Drawing Suite, and Pattern Sculptor, we were able to create the entire set of 3D patterns we needed.

Once the modeling was finished, the projects could be made ready for carving. All the pieces were laid out and grouped for optimal use of material.

There were over 50 different carving and cutout files to make this desk. Many of those were test pieces cut to make sure the pieces looked and fit correctly. This was a lot of machine time, but it went remarkably fast. The carving portion of these projects always ends up being the fastest and easiest part of the job.

After all the pieces were carved and cut, the building process began. The desk is basically made up of two pedestals, a middle section that bridges them together, and the desktop.