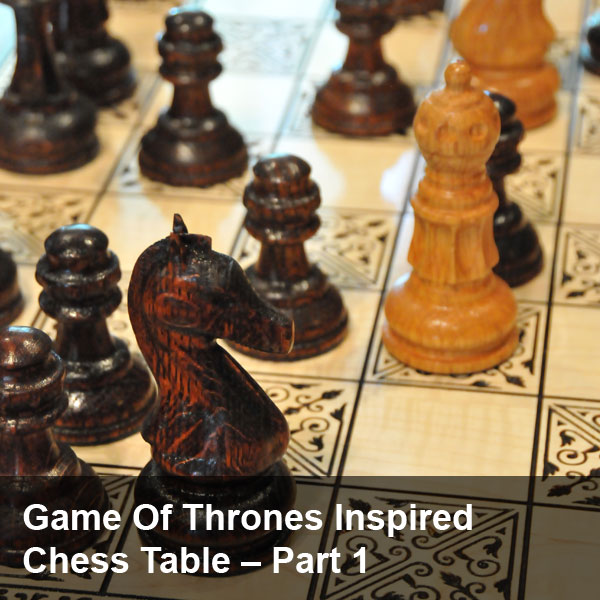 The featured project at the 2014 CarveWright Conference was a carved chess table and chess pieces.  This project utilized almost every feature of the CarveWright system and is a great demonstration of it’s power to create anything.  Below I’ll outline the processes we went through to design and build this project.

Earlier this year, I had the pleasure of testing the rotary jig during the final stages of it’s development.  The first thing I thought of making was a chess set. It’s an obvious choice, but irresistible.  I could either try to design my own chess pieces or set out to find some existing models online.  After some searching I found a set I liked on thingiverse.com.

These were more interesting then the normal plain turned pieces you see.  I didn’t want to use the jig to make something that would look like it came off of a lathe.  It needed to be carved.  I downloaded the files and imported them into Designer.

See more about the rotary jig

After several days of carving, I had a complete chess set carved in oak.

I was able to chuck the pieces into a lathe to help sand the smooth parts, but most of it was carved and irregular, which needed a 240 grit sanding mop.  Once sanded, I removed the individual pieces with a band saw.

Once separated, I worked with them individually. They all went through various levels of hand sanding, filling, and shaping with a dremel, until I was ready for finishing.  The dark pieces were stained with a Minwax red mahogany penetrating stain and the light pieces were just clear coated with high gloss polyurethane.

Now, I have a nice carved chess set, but it doesn’t have a chess board.  Of course, this is a perfect job for the CarveWright, but what kind of chess board should I make?  Several ideas were bounced around and I almost settled on designing a tabletop board carved to look like a castle with drawers for the pieces.  That would be a wonderful project, but when looking at how big it would have to be to accommodate these pieces, I realized it would be as large as a table.  So, why not just make it a whole table?

One night I was contemplating this project and I sat down to watch Game of Thrones on HBO.  I love the intro to that show, as I think most fans do.  I was noticing the carved heraldic bands revolving around the sun thinking “those would be fun to carve”.

I was able to find the panels online and was disappointed to find there are only three.  A three sided chess table might be hard to pull off.  Oh well, I’ll figure that part out later.

So I’ve decided to make a table, and I have a theme. Now, off to Google to do some research on what chess tables look like.  There are chess tables in every possible style you can think of.  Being that our theme involves traditional heraldic elements, keeping with a classic style is most appropriate.  That helps narrow it down a bit.

I also came across several chess boards that had carved squares rather than the expected alternating wood blocks.  This looked like a perfect opportunity to play with some new software I had been handed to test.

Now with all these ideas, its time to draw up some plans.  It is critical to work from some sort of plans when building anything.  Even if it’s just rough sketches with your measurements written in.  Just make sure your measurements are accurate. Sometimes, there are already woodworking plans for what you want to make.  Keep that in mind when doing your searches.

From the plans, I could determine how much material I needed and went shopping for lumber.

This is a demo store for testing purposes — no orders shall be fulfilled. Dismiss