In a famous and much quoted decision from 1604, Sir Edward Coke declared that “the house of every one is to him as his Castle and Fortress as well for defense against injury and violence, as for his repose”  In other words “a man’s home is his castle” and no castle is complete without cannons. The thing about cannons is that they can be hard to come by these days, unless you have a CarveWright and a little ingenuity.

What I wanted was a row of cannons for a balcony at my home that overlooks the water. They needed to be a manageable size but large enough to be impressive.  Also, because they were going to be outside, they needed to be made out of material that would weather well and have the look and feel of iron. I also wanted them to go bang! I mean seriously, what’s the point of having a row of cannons if you cannot wake the whole neighborhood with them, not to mention intimidate passing boats.

In order to make the cannon barrels durable and easier to produce multiples, I decided to cast them out of concrete. After doing a little research, I chose to model the cannons off of a 6 pound British naval cannon. The smaller of these cannons had barrels that are roughly four feet long with an eight inch maximum outer diameter and a three inch bore. This size meant that I could make the mold out of four two inch deep carvings.  The material I chose to make the molds out of was insulation foam. This material is cheap, carves easily, and can be found in 1 inch and 2 inch thickness at any local hardware store. 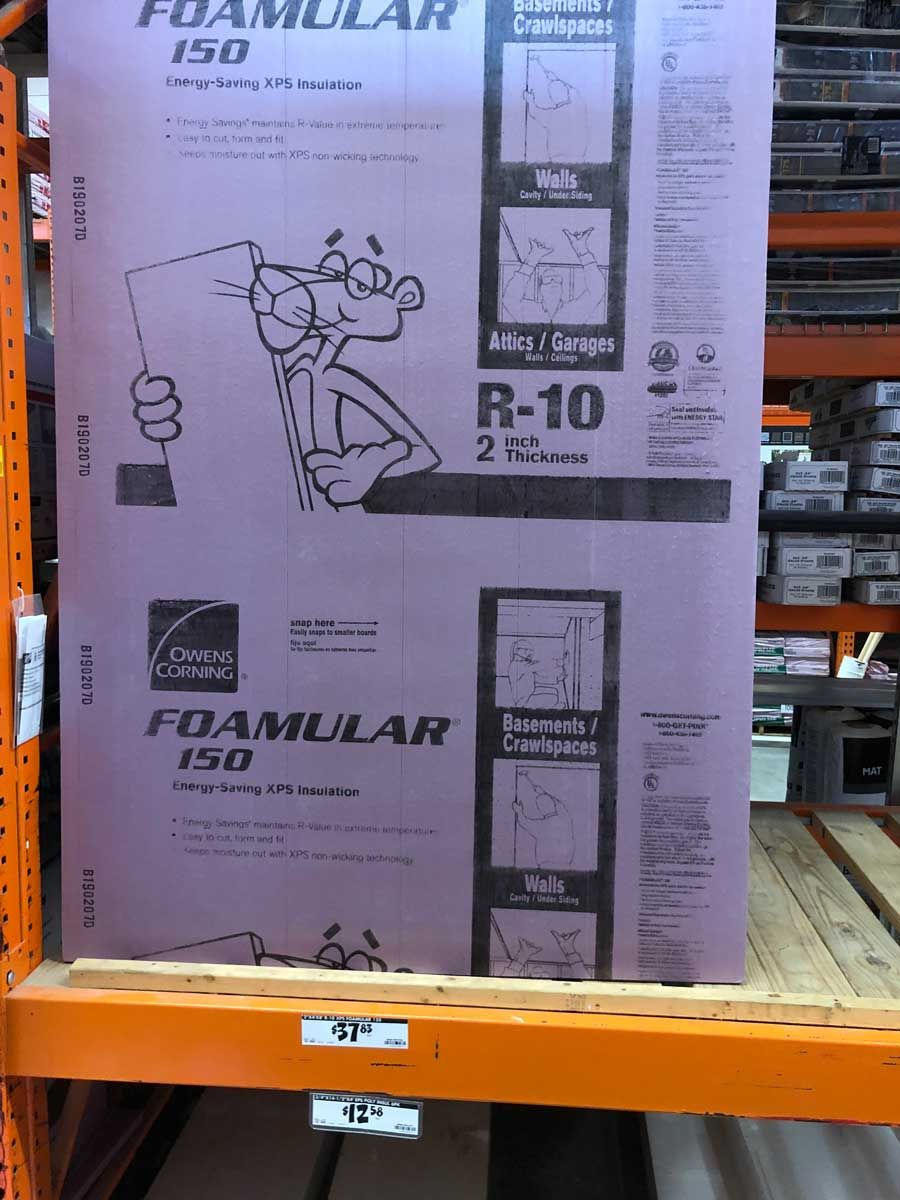 I then added extrusions for the trunnions and for the top of the cannon I added a touch hole and my crest. 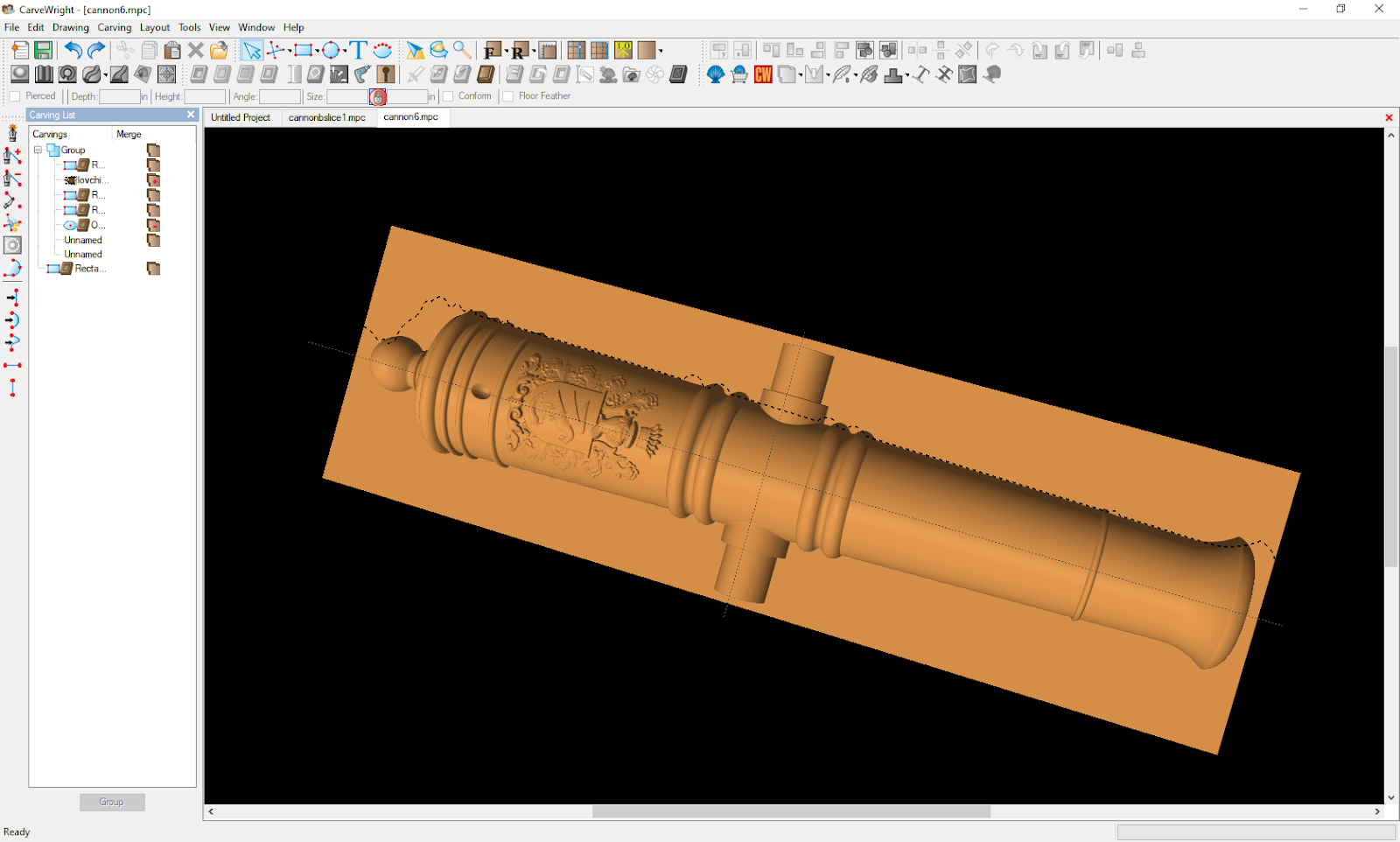 I used the Make Pattern tool to turn the top and bottom of the cannons into patterns then used Sculptor to export them as STL’s.  Last, I used Slicer to slice the cannon hafts into 2 inch thick patterns.

Back in designer, I created 48x12x2 inch boards and inverted each of the cannon slice patterns to create the sections of the mold.

A simple jig made out of plywood was used to support the foam. 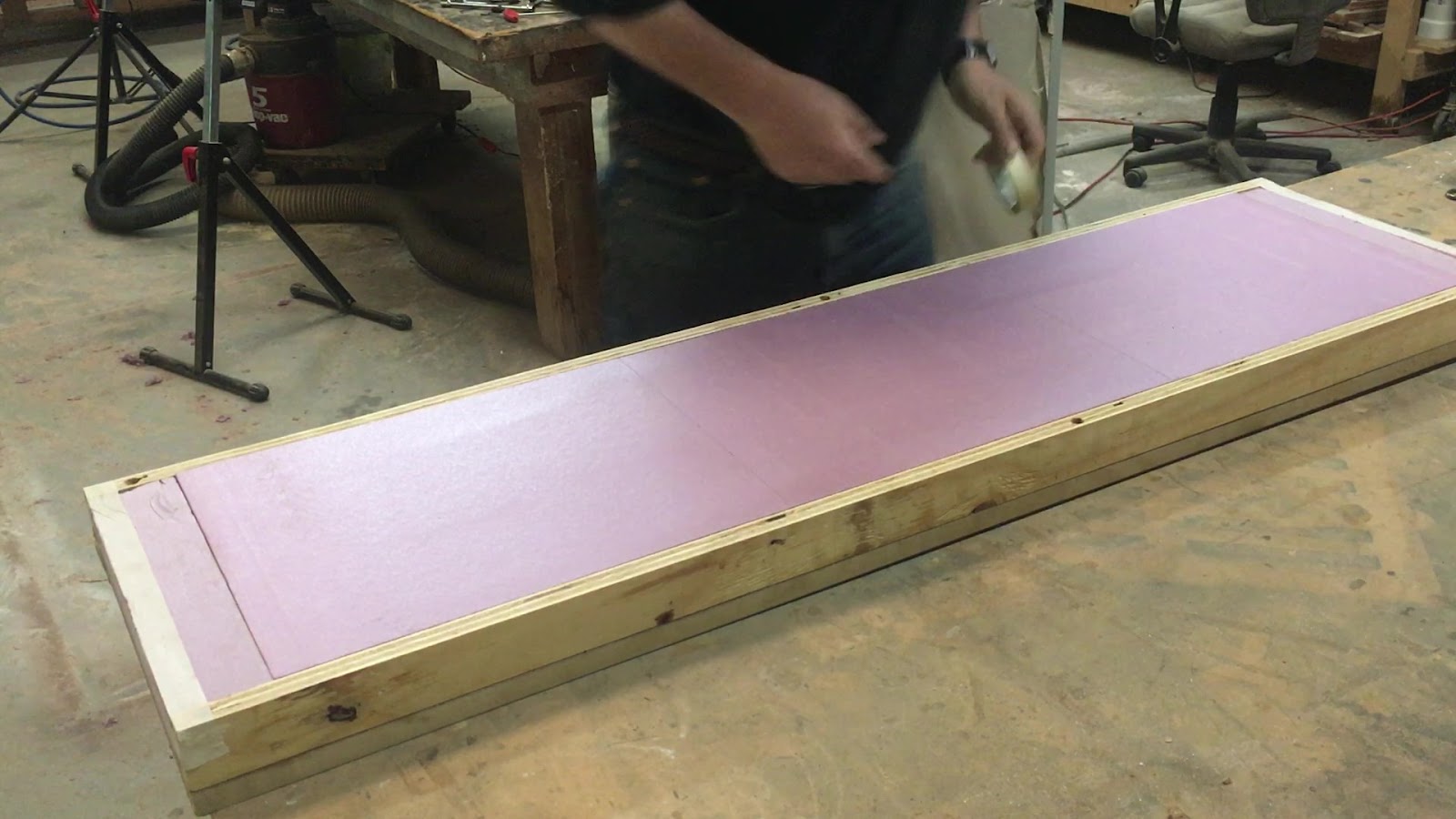 It would have been best to make these parts out of 2 inch thick foam. However when I made these molds I was only able to find 1 inch foam locally so I stacked two pieces together and carved them. This works but you have more seams to deal with which means more work. Note: If you do stack foam up to carve do not glue the layers together before carving. The glue will gum up the bit and ruin the carve.

Once the carving was done the sections were aligned together.  This was done by stacking up three sections and using a 1/2 inch sharpened piece of tubing to cut holes in the foam while lining up each layer in that area to minimize seam lines. 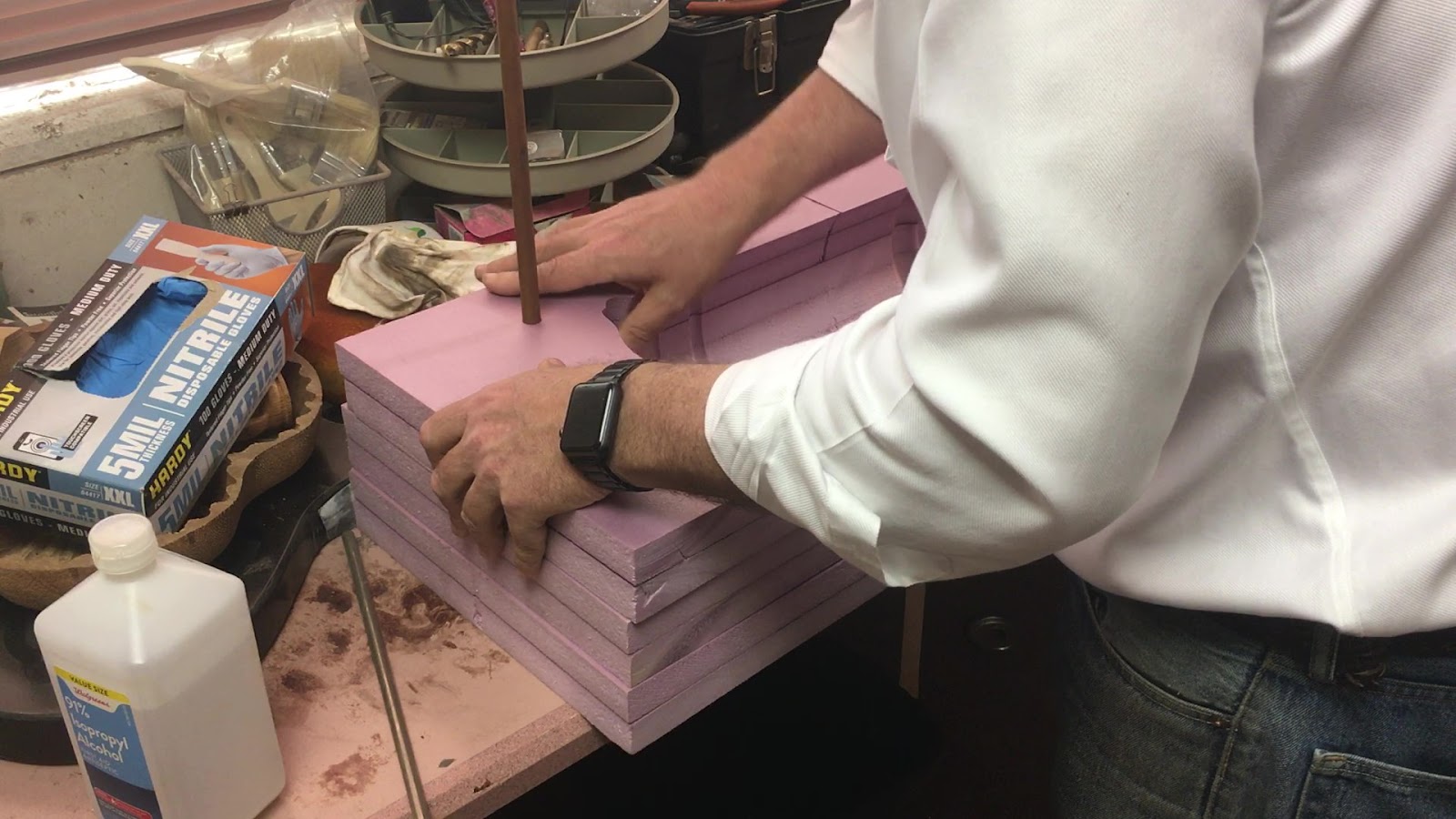 Then I used 1/2 inch dowels to peg the layers together. 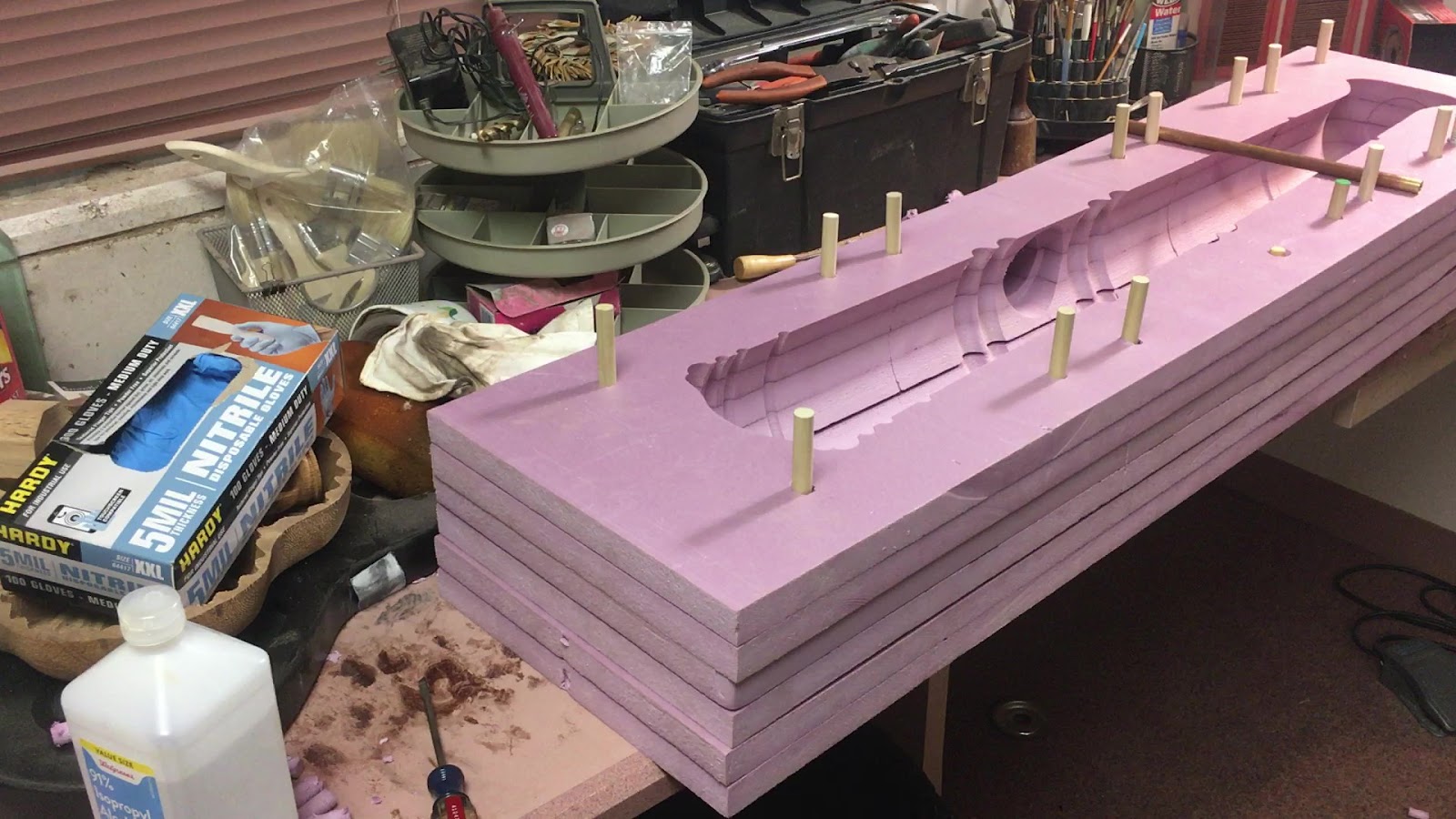 The layers of each halves of the mold are glued together using epoxy. Note: Always test any glue paint or filler before using on foam. Many will melt the foam.

I squared the foam edges and encased both halves in plywood boxes to make the molds nice and ridged.

Next, the mold is coated with two part epoxy resin.

Note: when coating foam start by dusting the carving off with a soft brush, then gently brush on a very very thin coat of epoxy resin.  If you put too thick a layer on the epoxy will pool in the bottom of the mold destroying details. After two thin coats you can start to smooth out the surface and fill seams.

Two 4 inch stainless drain covers are installed in the combustion chamber to accelerate the gas leaving the chamber resulting in a louder bang.

To reinforce the ball on the cannon barrel, I added another bolt to the back of the combustion chamber. Then used wire to wrap around the 3 inch pipe to reinforce the trunnion.

Next, both halves of the mold are coated with vaseline to act as a mold release.

Then, the two halves of the mold are bolted together using 1/2 inch lag bolts that are run through the mold. 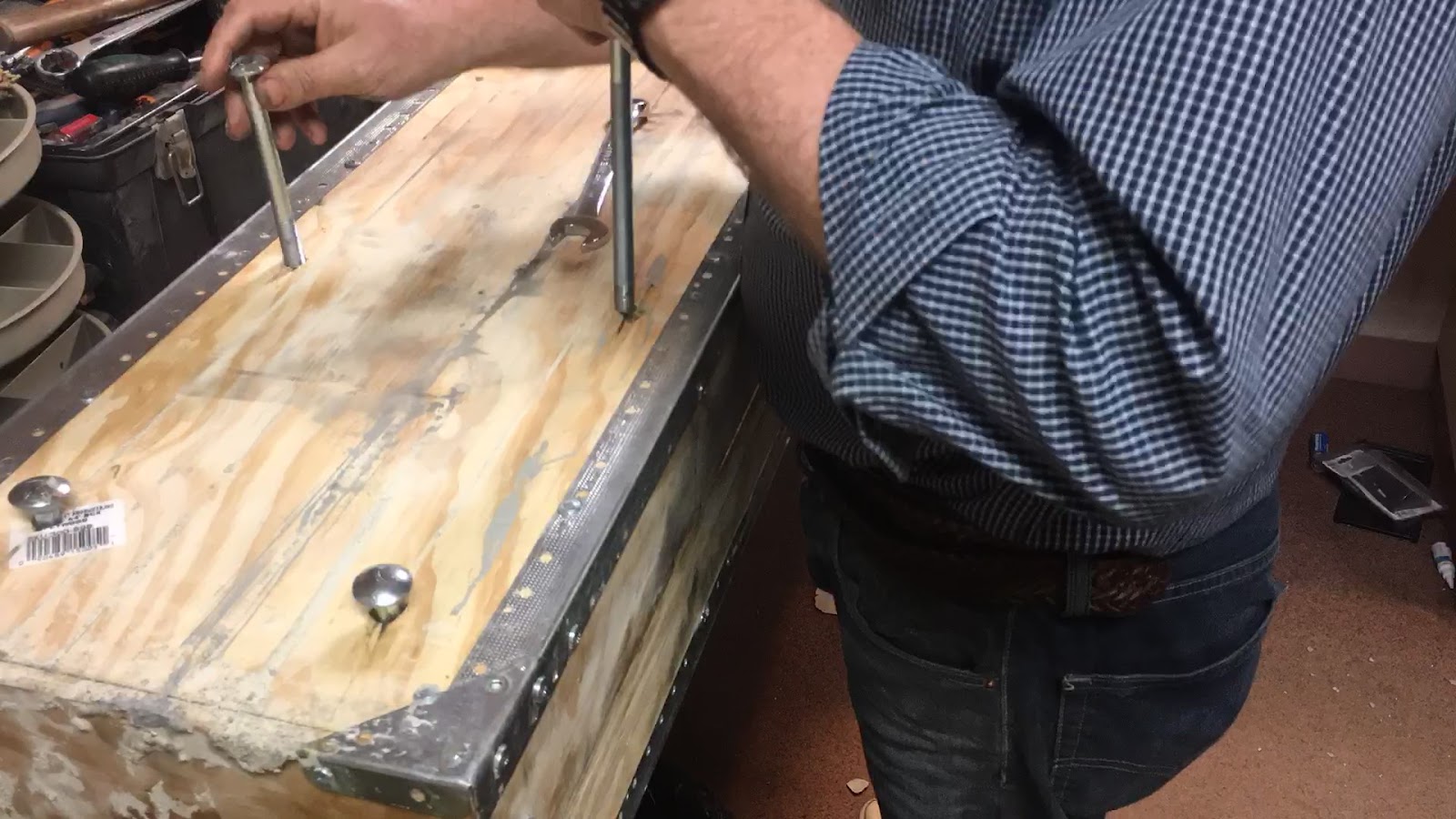 The bolts are cinched down tight to create a watertight seal between the halves of the mold.

Last, the end of the pipe is held centered in the mold with a pipe plug and pipe strapping.

The formula for the cast was

The mixture was blended with a drill and poured into the mold.

A reciprocating saw, with out the blade, was used to vibrate the mold to help get air bubbles out. 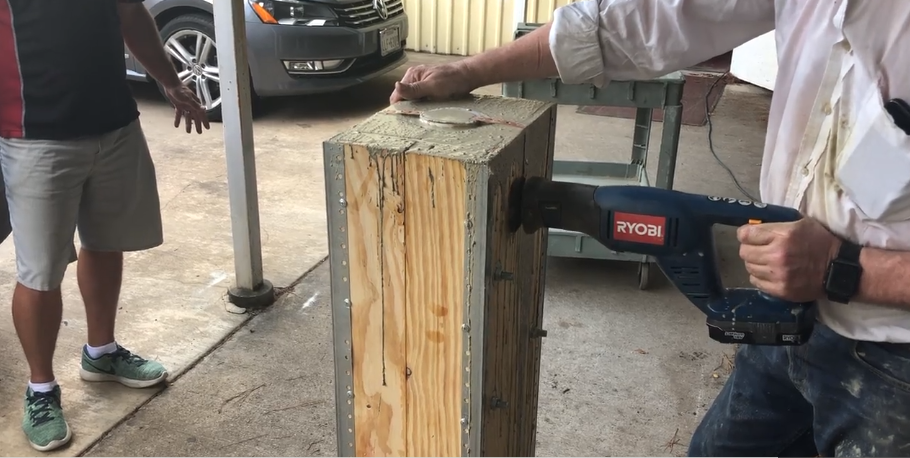 We clamped a long pipe to a table overhanging long enough to support the cannon barrel. An hour after pouring, the mold was slipped over the pipe. 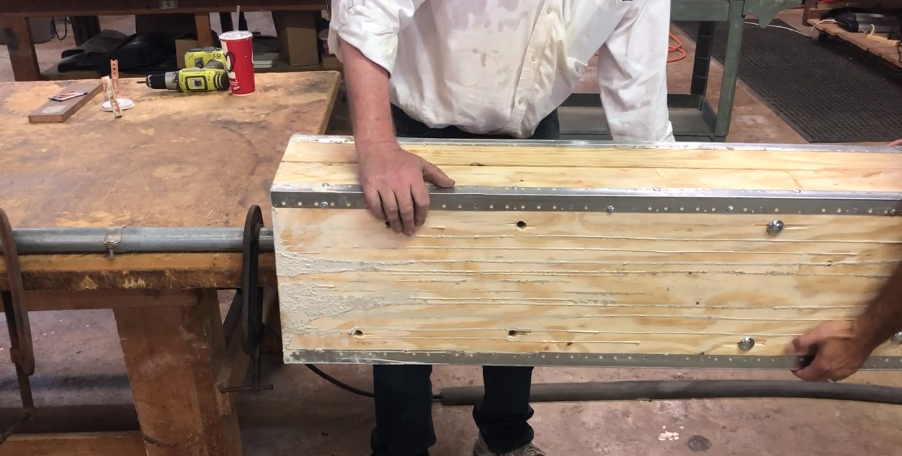 Then, the bolts were removed and the two halves of the mold are pulled away to reveal the casting.

I sanded the seams while the casting is still warm and softer. After the castings are cooled, they were spray painted with Krylon FUSION Gloss Black spray paint. The concrete was pretty smooth, but there were still small air pockets all around the surface that I decided to fill. Then, I sanded and repainted until they looked and felt like iron cannons.

Once the barrels were under control it was time to create the carriages for the cannons. 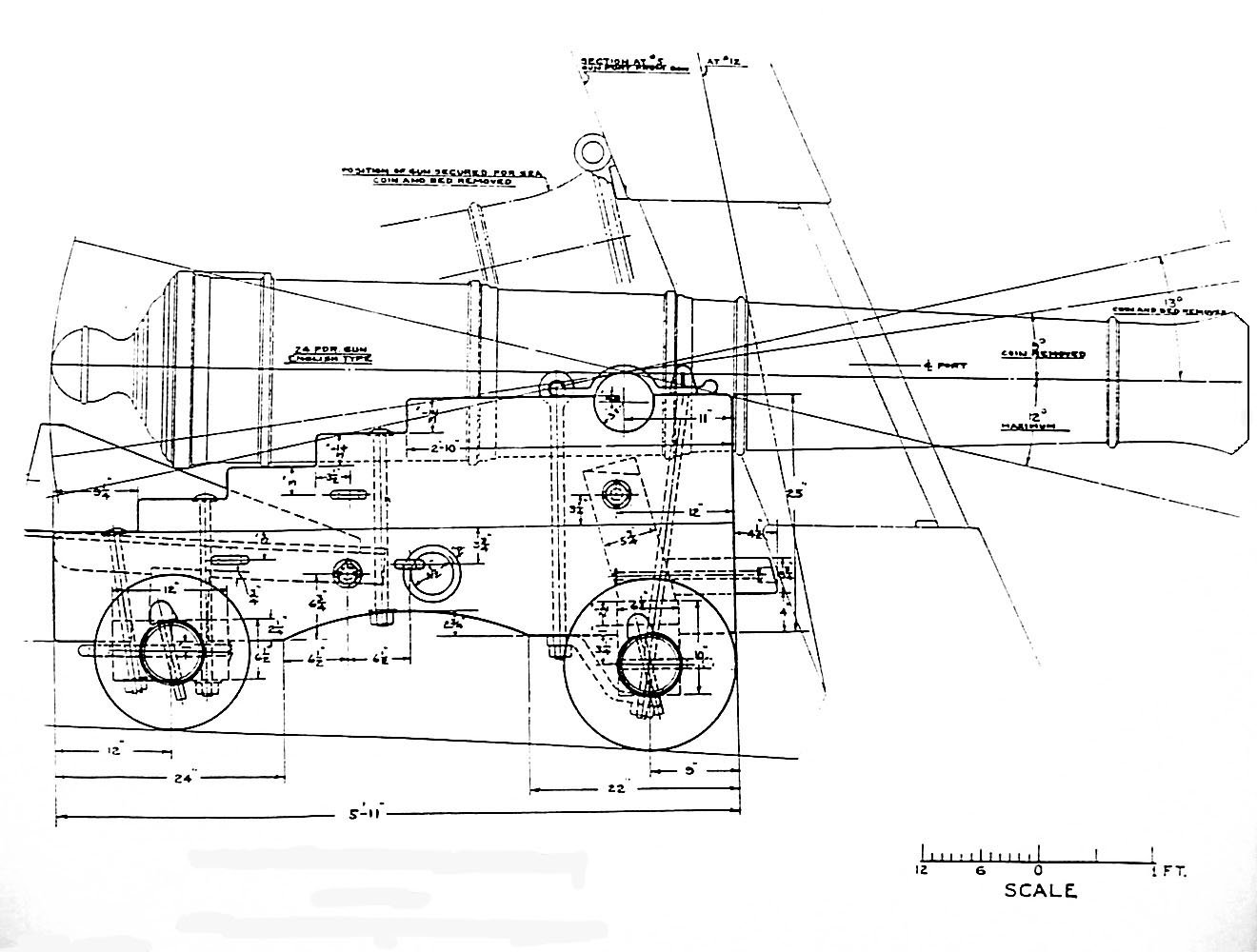 Using the dimensions worked out from the drawings I found, the timbers were cut, milled and glued up to create the various parts of the carriages.

For the wheels, I laid them out in Designer on a 3/4 inch board with pilots for the bolts. Each wheel would be three sections glued together to make them nice and thick.

Next, I started creating all the various hardware pieces. Some I made out steel while others were found at hardware stores. 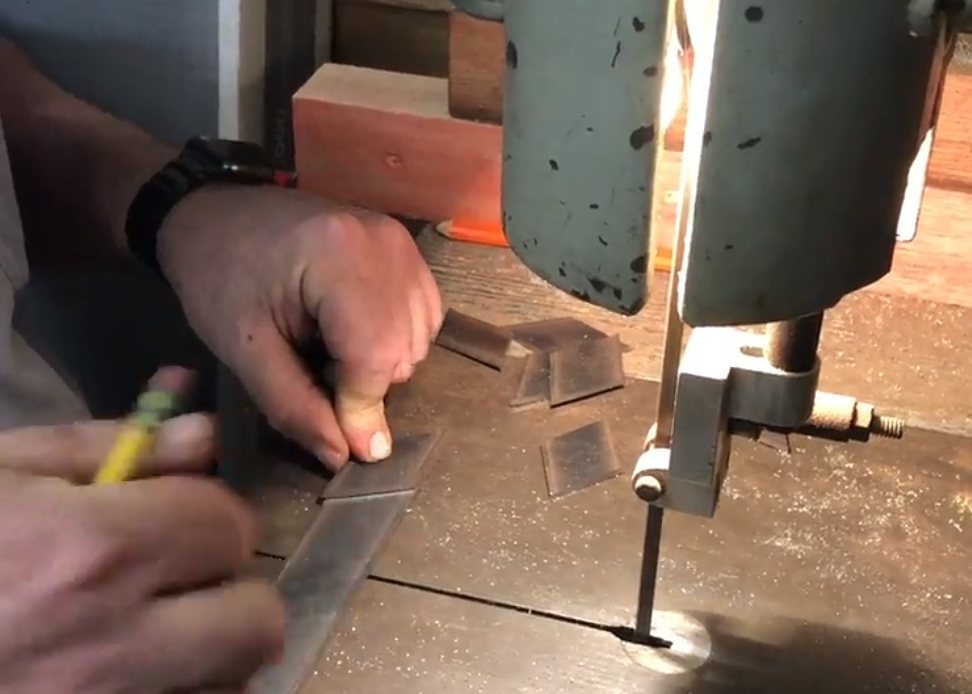 Then, everything was dry fitted together.

With the fit worked out, the parts were sanded and stained.

All of the hardware was blackened to give them a period look. Carriage bolts were pressed into the wheel rivet holes for a very authentic embellishment.

Last, all of the wood parts are coated with a Spar Urethane. 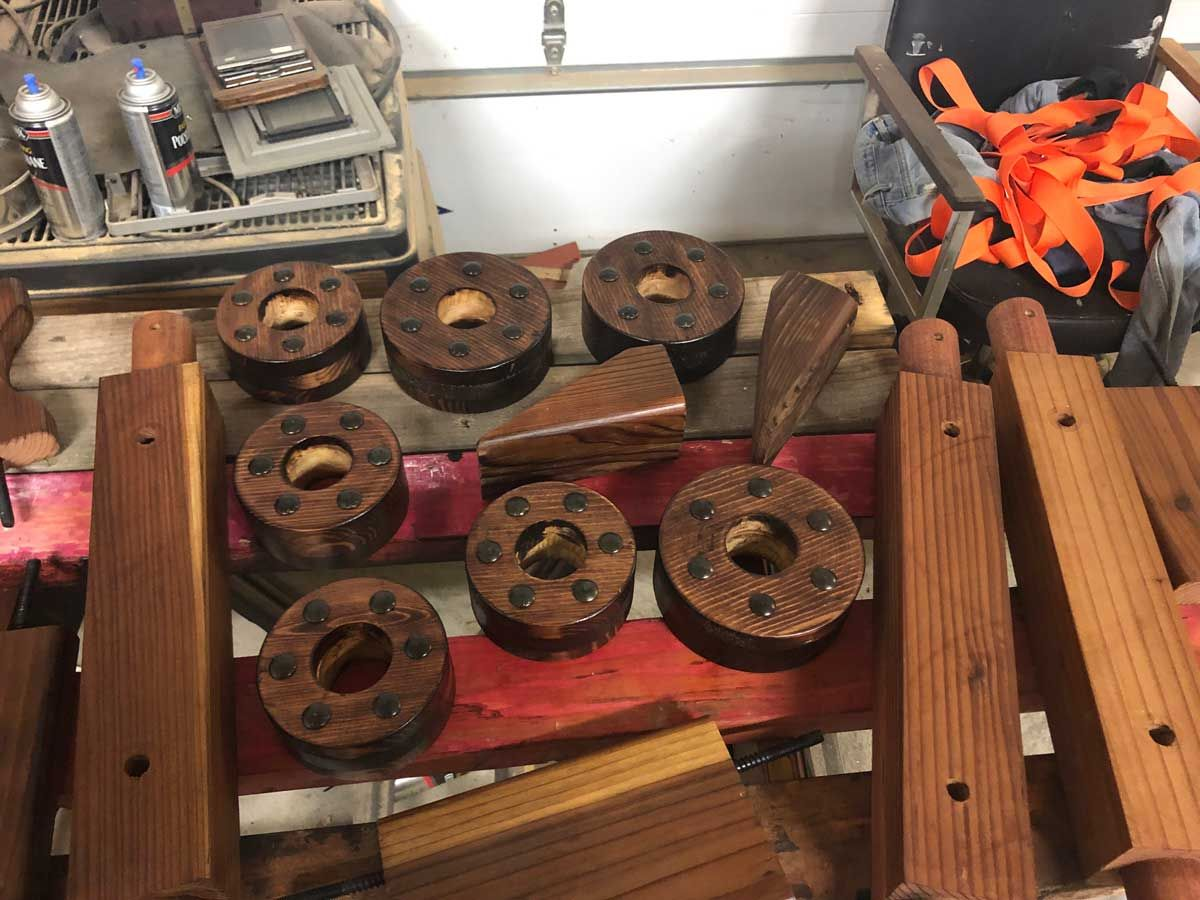 Nothing left to do but put the pieces together.

I tried to use dye with one of the early casts which resulted in the it not curing correctly and it cracked.  Even a cracked cannon can be cool though. I decided to make it a relic and painted the barrel with Sophisticated Finishes iron and treated with rust solution.

The result is a truly unique piece of yard art.

I hope you enjoyed seeing this project. It was fun to build and has become an exciting attraction at my home!

If you’d like to try making these yourself, I’ve made the cannon barrel project files available for download.

This website uses cookies to improve your experience while you navigate through the website. Out of these, the cookies that are categorized as necessary are stored on your browser as they are essential for the working of basic functionalities of the website. We also use third-party cookies that help us analyze and understand how you use this website. These cookies will be stored in your browser only with your consent. You also have the option to opt-out of these cookies. But opting out of some of these cookies may affect your browsing experience.
Necessary Always Enabled
Necessary cookies are absolutely essential for the website to function properly. This category only includes cookies that ensures basic functionalities and security features of the website. These cookies do not store any personal information.
Non-necessary
Any cookies that may not be particularly necessary for the website to function and is used specifically to collect user personal data via analytics, ads, other embedded contents are termed as non-necessary cookies. It is mandatory to procure user consent prior to running these cookies on your website.
SAVE & ACCEPT