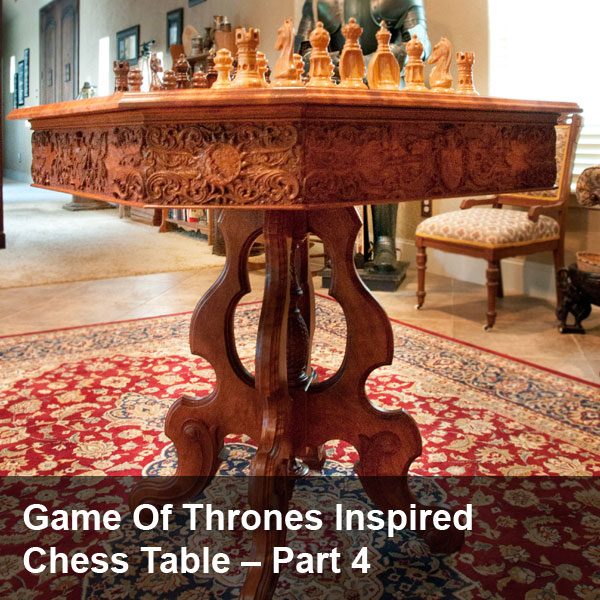 The skirt of the table is where the real fun of this project happens. In Part 1, I showed the panels from the Game of Thrones intro that gave me the idea for this table. These could be modeled without much difficulty in the CarveWright software, but the table has 8 sides.  Four long and four short for a cut corner design.  Having only these 3 panels to work with poses a pretty big problem.  I could invent a new panel to fit with the style of the design, but these panels are actually telling a complete story.  Inserting another panel would need to fit within this story and that seemed like a bigger job than I was prepared to do.  So, this is where the “inspired” design concept comes from.  I liked the heavy filigree clustering that formed a symmetrical framing for the scene in the center of the panel, so I started there.  I found most of the patterns in the basic patterns that came with the Designer software, and added a couple more from the CarveWright Pattern Depot. Nesting multiple filigree’s together and on top of each other to create a nice and busy, but elegant design

I used the mirror tool to make the design symmetrical and created trimmed edges on the top and bottom with the extrude tool from the modeling suite.

The next step is to create my own panels scenes.  I wanted to make them distinctly different from each other and, since chess is called the “game of kings”, I decided on creating four different kingdoms.  The Pattern Depot made this pretty easy, which also made it more fun, too.  There is a great collection of heraldic designs for doing medieval style family crests which were perfect for this.  Shields, lions, dragons, and everything else I could want at a click of a button.  The crests were only one part of the scene, though.  I wanted to represent different geographic locations and even hint at the economy of these kingdoms, as well.   Again, everything I needed was only a search away in the Pattern Depot.

Using various patterns such as the shock of wheat and the sickle, combined with a grass pattern and rows of a plowed field that I modeled for the background, I was able to depict an agricultural plains-based kingdom of the Lion for this panel.  Using the materials tool from Designer 3, I filled all the background space with a textured sky-scape to maintain the busy nature of the design and create more depth and visual interest.

A clipper ship and serpents flank this seafaring crest featuring a seahawk on the shield.  The waves and clouds in the background were created using the Materials tool from Designer 3, again.

Winged griffins and date trees surround the scimitar wielding crest of this desert kingdom.  I drew overlapping hill shapes and used the curve puff tool from the modeling suite to create dunes. Then merged a sand like texture from the materials tool to further the desert effect.  Sun rays, also, overlayed with a material tool texture dominate the background of this arid landscape.

Mountains and forest depict this land as another distinctly different place.  The crossing hammers show this to be a kingdom of metal workers. The ores for doing so, probably mined from those mountains, where surely dragons live.

As you can see, I had a lot of fun with these.  Like the Game of Thrones panels, I wanted to create a story with imagery for each of these.

I still needed 2 more short panel designs for the cut corners.  I came up with a sun and moon motif to create a fun neutral separation between the panels. The panels being designed now, I uploaded them and set them up for carving.

While those were carving, I started the process of assembling the chess board tabletop.  In part 2 I carved and assembled the chessboard, now I will mount it and build out the rest of the tabletop that surrounds it. We decided to use a plywood backer-board for the tabletop to more easily hold things together and keep it flat.  We cut it out to match the inside dimension of table skirt.  Then we measured and squared up the chessboard to fit exactly in the middle.  Next, we cut and mitered some 1/4″ walnut strips to create a nice dark boarder around the chessboard. Centering the chessboard on the backer board

After these were glued and tacked together, the cherry framing comes in and is mitered to fit. Doing one side at a time, we were able to achieve a seamless fit.

Once the miters were made and everything was fitting nice and tight, we secured it down with glue and screws from the bottom. It’s starting to come together! We need to miter the cut corners next. We were able to do this very accurately on the miter saw. Once the cut corners were made, we wanted to sand the entire top to smooth out any slight variations that showed up in the seams.  We also used this time to paint the carved areas of the chess board.  First we coated the entire thing with a spray lacquer to seal any exposed end grain on the edge of the carvings.  This is to help prevent the paint from seeping into those areas.  Then we used acrylic paints (nothing fancy) by mixing up a dark brown with a hint of red to pick up the accents of the walnut and pop with the red of the cherry. Next, we used a sander to sand the entire table top, smoothing out all the seams and removing the excess paint. And some more sanding

The result is pretty stunning.  The design really pops. I can’t wait to get some stain on this! Last step to the top is a routed edge with a 1/2″ classic ogee to give it a nice decorative finish. BTW, there is a QuckChange chuck on that router.

With the table top flipped over, the carved skirts get measured and mitered to fit around the edge of our base. We’ve got 2 drawers on this table so we’ll attach everything, but those 2 sides.  (Make sure you put the drawers on the players side of the chess board.  When sitting at the board, remember there should be a black square on the left.) Now, it’s time to build out some structure and create the mounting blocks for the drawer slides.

We wanted this thing to be pretty solid.

Next is the drawer slides.  We decided to mount them underneath in order to gain the widest possible drawer to fit all the chess pieces. Speaking of drawers, we had some more carving to do.  I carved a sectioned drawer insert for the chess pieces to be cradled in. I wanted to give the inside of this drawer a nice finish so I experimented with a fun little process called “flocking”.  Flocking is a process of gluing very fine fibers to a surface to create a soft fabric feel to that surface.  I bought my supplies at craftflocking.com, and learned the process by watching their helpful videos, too. It’s a great process and really inexpensive. I did the flocking in a large tub to reclaim the loose material. With my drawers flocked, and thoroughly dried, it’s time to finish the assembly and begin staining. That cherry looks so amazing stained!

Once stained, we began the long process of applying coat after coat of lacquer.  To get a great luster, we kept sanding in between each coat with finer and finer sandpaper. We sprayed several coats on the legs while doing this, as well. Look at that shine!

Last thing to do is attach the table top to the legs, and set up a game! Thanks for following this build.  I hope you enjoyed it and has inspired some to take on more complex projects.  This is much more complex looking, than it actually was to make.  All we needed was a little imagination, some research, the Pattern Depot, and a CarveWright.